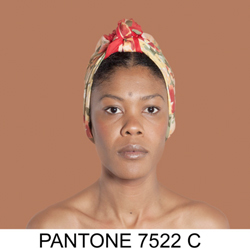 Humanae, by Angelica Dass, is a chromatic inventory, a project that reflects on the colors beyond the borders of societies skin colour codes by referencing the PANTONE® colour scheme. For those who don’t know PANTONE® Guides are one of the main classification systems of colours, which are represented by an alphanumeric code, allowing to accurately recreate any of them in any media. It is a technical industrial standard often called Real Color.[br]
The aim of Angelica’s photographic work is to achieve the public’s direct involvement in photography as a whole concept, as a non-passive communication between people. All her projects deepen in an important issue: social, cultural and racial identity and masks.[br]
The project development is based on a series of portraits whose background is dyed with the exact Pantone® tone extracted from a sample of 11 x 11 pixels of the portrayed’s face. The project’s objective is to record and catalogue all possible human skin tones.

Check out the rest of the Humanae’s Tumblr Site